Biometrics in Elections: A Basis for Building Stronger and More Inclusive Democracies

Co-founder and CEO of Innovatrics

Ensuring voter eligibility is one of the most crucial tasks election officials face. It’s a challenge as old as elections themselves. Unfortunately, today’s political climate has made voter identity fraud one of the most publicized election issues, generating negative headlines and mistrust among the electorate. The solution to this issue is biometric identity systems.

Biometrics delivers absolute identity confirmation. It prevents human errors, such as typos, omissions or legibility problems, and it creates a digital backup for paper records. Biometrics are also typically faster and more convenient for both poll workers and citizens compared to traditional identity verification processes, such as paper voter rolls, logbooks, cards and affidavits. The biggest advantage of biometric voter verification, however, may be in ensuring the ability to participate for as many legitimate voters as possible across their entire lifetime, regardless of physical or life changes. The total of these advantages makes biometric identity the best choice for voter verification today and more so in the future.

According to International IDEA’s Information and Communication Technologies (ICTs) in Elections Database (as of Feb. 2019):

In those countries surveyed:

Fingerprint biometrics and, more recently, facial recognition have both become robust, reliable standardized and accurate. In fact, the accuracy of both far supersedes human recognition abilities. The rapid growth of inexpensive ultra-wide bandwidths from technologies like fiber-optics and satellites, and cheap computer memory and computing capacity will further expand the possible applications for biometrics, allowing them to become commonplace even in rural and underdeveloped regions. In fact, currently the biggest obstacles to universal adoption of biometrics for voter identification are legacy systems and cultural and institutional resistance.

Social, functional and evolutionary changes are driving the world toward broader adoption of biometrics. Biometric voter ID has taken root in transitional and post-conflict nations, particularly those in Asia and sub-Saharan Africa. Many of these countries share the similar issues: problems with physical infrastructure, poverty and literacy. For some countries, this opens opportunities to simply jump past twentieth-century technologies. Telephones are a great example of this phenomena. Rather than building landline infrastructure, like switching stations and telephone poles, these nations have jumped directly to digital cellular networks. Access to mobile devices among adults averages above 80%, as is adoption of mobile-based services. Mobile phone growth in these regions plays a role in biometric adoption, as we will explain later.

Countries that are opting for biometric voter registration commonly don’t have reliable systems for citizen identification. The reasons may be manifold: the countries might be too young to provide IDs to all citizens; citizenship status itself may be hard to prove, if the birth certificates are unreliable or non-existent; the country’s infrastructure may be prohibitive for citizens to actually obtain an ID, requiring slow and costly travel. In many countries, it’s simply too much hassle to get an ID, particularly when it doesn’t have a good use due to limited government services. 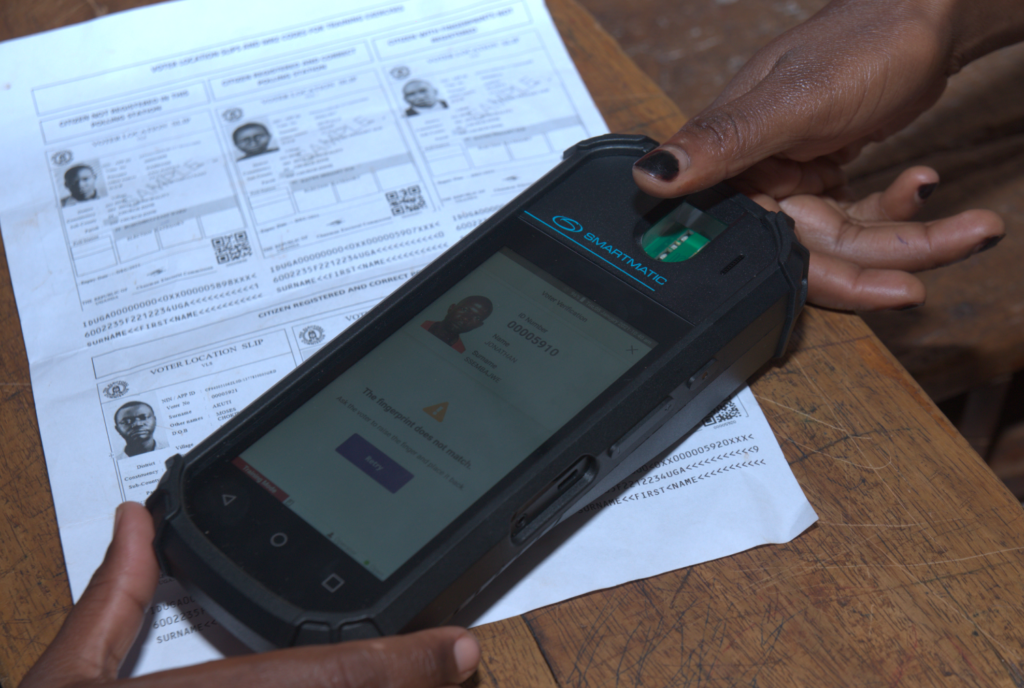 National identity systems are experiencing similar scenarios to what has happened with landline phones. Outdated, incomplete, manual identity systems—if they existed at all—are being replaced with digital biometric ones. In many places these efforts are financially supported by third-party NGOs and multilateral organizations like the UNDP. These biometric systems commonly serve double duty as voter-registration databases.

Why biometrics is the perfect solution

Biometric voter registration can solve several problems at once, particularly if the technology is used for a country’s civil registry and its voter rolls. It could eliminate the need to carry valuable ID documents, such as passports and birth certifications, to the polls on voting day. It can ensure the right to vote to those whose ID documents have been lost, damaged or are mismatched. This is not a fringe problem: a 2018 World Bank report puts the number of people without formal identity documents at about 1 billion, most of them in sub-Saharan Africa and Asia.

The problem affects developed countries as well. In the US, most states require a photo ID for voter registration, but there are obstacles to that for the impoverished, many immigrant populations, and many elderly people who have relinquished their driver’s licenses. 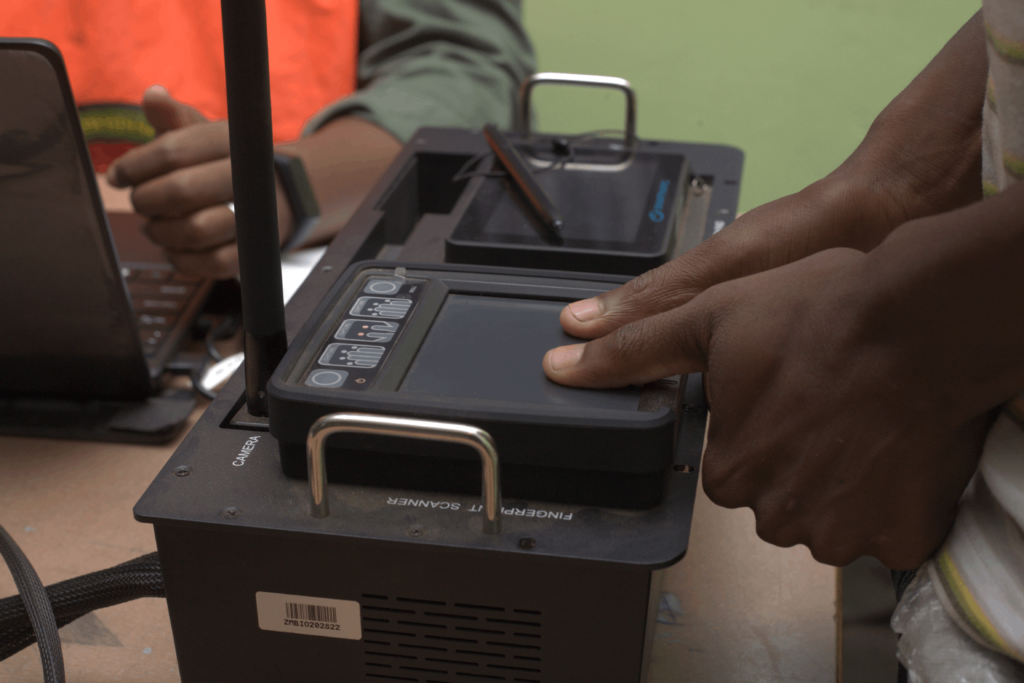 Additionally, almost 80 million people were forced to flee their homes by war or persecution in 2020 according to the UN Refugee Agency. This number doesn’t even include those displaced by climate-related catastrophes, such as flooding, wildfires, famine and storms. For individuals in both situations, identity – and thus voting – is often a huge problem. Identity documents are often lost, damaged or destroyed, along with the source documents needed to obtain new ID.

Gender-diverse persons, who represent 0.1 to 2% of the population, are also impacted by the limitations of traditional identity systems. Biometrics, however, completely obviates these challenges for people who identify as non-binary or trans.

The number of chronically unhoused (homeless) has remained essentially unchanged in much of the world for the last decade, roughly estimated at 1.5% of a country’s population. The COVID-19 pandemic and its economic impact, however, may force significant numbers of additional individuals into homelessness worldwide. But citizens without permanent housing are still eligible to vote – provided they have some acceptable form of identity.

Biometrics provides immutable identity confirmation for all of these impacted populations across all situations and scenarios. The portability and immunity from external conditions, situations and changes make biometrics the best choice for voter identity management.

Biometrics is already making possible the one-voter, one-voter principle in countries where it is implemented and will enable the “vote where you want and when you want” principle. Added convenience is a key to reversing the downward trend in voter turnout worldwide.

The widespread adoption of WiFi, broadband and mobile smart devices (phones and tablets) has made us less depend on bank branches, groceries stores and libraries, to name but a few. So, too, will they make us less reliant on in-person voting. These technologies, combined with biometrics, will be part of the next wave of voting systems that enable the voter to decide when and where to participate.

This type of remote voting is hugely convenient for ex-pats and overseas citizens who might not otherwise participate in an election. Beyond simple convenience, biometrically enabled remote voting systems can extend the franchise to millions of potential voters in remote rural areas and in countries with underdeveloped transportation infrastructure. 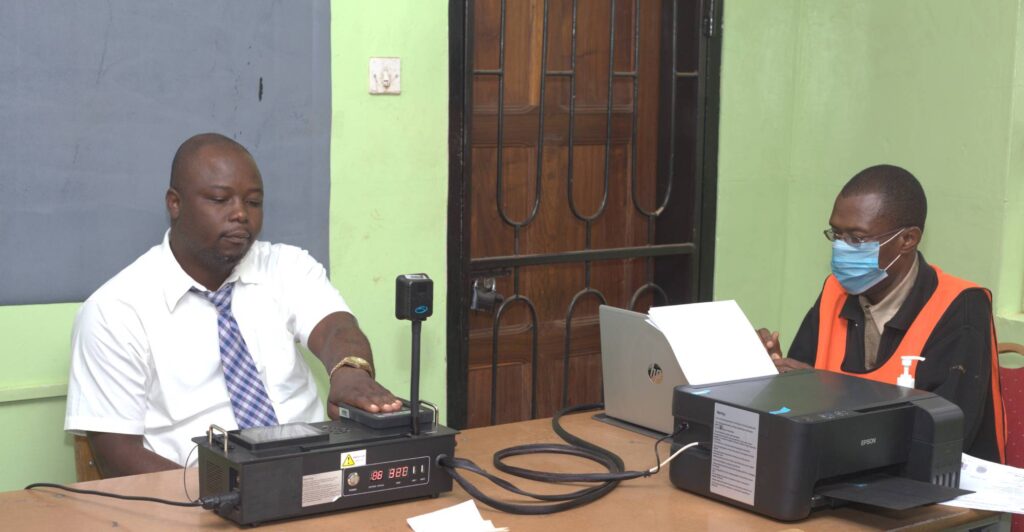 In developing countries, a trip to the polling station can cost a family an entire day’s pay and consume hours (if not days) in transit. The overwhelming majority of citizens in these same countries, however, have mobile devices (as was mentioned earlier), which would give them access to remote voting if provided by their government. Remote voting would also benefit voters with disabilities, many elderly citizens and those in conflict-torn areas who would otherwise be afraid to go vote. Enabling these people with remote voting capabilities, secured by biometrics via off-the-shelf smartphone, would be a boon to voter turnout.

With image processing now supported by AI and neural networks, facial recognition is now also able to estimate the age of the person in the photo. In the Guinea presidential and parliamentary elections in 2020 and 2021, Innovatrics was able to select out obviously minor citizens from the voter register. The AI-based facial recognition algorithm successfully identified 60,000 such entries out of more than 7 million.

Other innovations, which may one day make their way into voter and citizen registries, are already being used in practical application. Most physical biometric solutions systems authenticate the user only once, usually at the beginning of an interaction, such as logging into a device or checking in at a voting center. That leaves open opportunities to fool the system. For example, the original user may provide his/her credentials to another person after the user has been successfully authenticated (akin to tailgating). To minimize such possibilities, behavioral biometric solutions analyze users’ interactions with their devices, recording activities that vary from normal usage patterns. Behavioral biometrics uses continuous machine learning to authenticate users based on their behavior patterns, such as pressure, gyroscope, button hit zone, motion, accelerometer, mouse actions, etc.

Gait analysis, for example, uses data from a mobile phone’s accelerometer to measure an individual’s unique walking style. This information can then be used to confirm if the rightful phone owner is indeed in possession of it – essential for remote voting. Researchers at the University of Manchester found that their gait analysis system was 99.3% effective.

Vein-reading devices are leading the way in touchless biometrics. An authentication device scans veins in the palm with near-infrared rays, which are absorbed by the reduced hemoglobin inside the vein. The scanner reads the absorption pattern, mapping the unique vein pattern for each person. The information is converted into encrypted data that serves as the identity record. This type of contactless technology may be more important as the world learns to live with COVID. 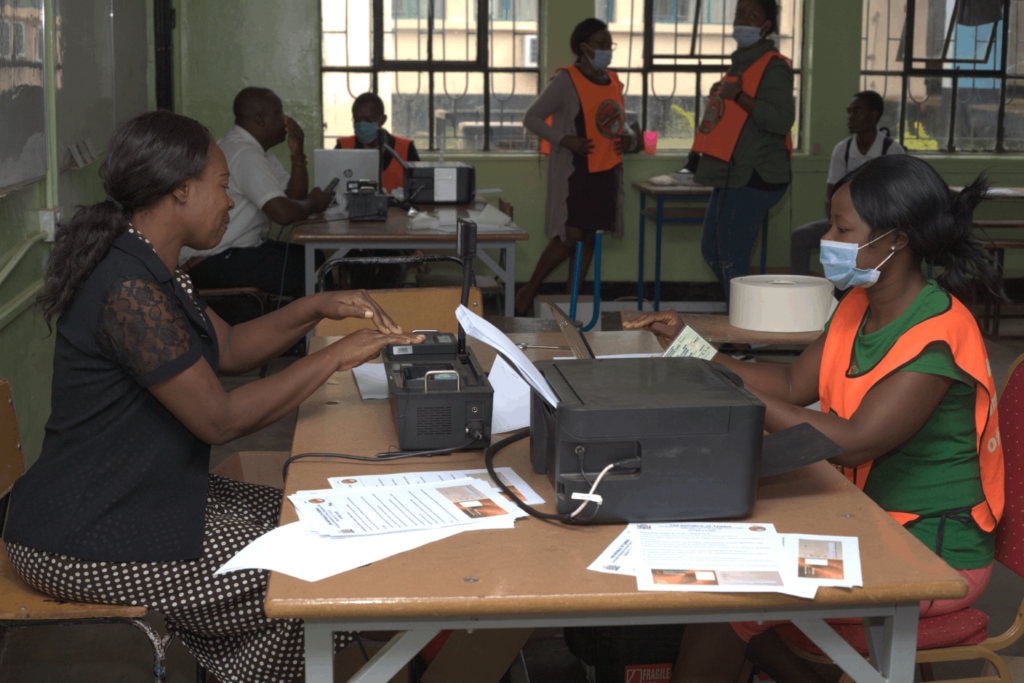 Chemical biometrics is a still–emerging field that involves measuring chemical clues such as odor and the chemical composition of human perceptions like DNA. This encoded biometric information is stored in a database and digitally sampled during authentication and verification.

These innovations can make up for shortfalls in current biometrics. For example, fingerprint scans may be of no use for individuals whose fingerprints have worn away from manual labor or be altered by catastrophic injury. Such problems are far more common in developing countries and agrarian cultures. These technologies may or may not make their way into voter registries in the future. Either way, they are proof that biometrics still has a long runway in front of it.

The inclusivity of a biometric registry is perhaps its most important benefit: it ensures the person is correctly identified even when the voter is unable to read or sign their name, is traveling, or is unable to get to a vote center. Biometric registries follow the voter for a lifetime, regardless of financial or personal conditions.

The technology can weed out duplicates and other inaccuracies in the election register, both intentional and inadvertent. Redundant records can happen when the same person registers in different electoral precincts, for example, innocently or with the aim of getting multiple voter IDs. With biometrics, database duplicates are marked for human review, where they are verified or removed.

Biometrics can ensure that each voter gets one and exactly one vote. In countries where election fraud can happen through easily forged or stolen IDs, biometric identification can reduce it to basically zero. Biometric features cannot be copied, forged or stolen, a person is either present or not and, once she or he casts a vote, cannot vote in the same elections again.